Motherboards and information about them 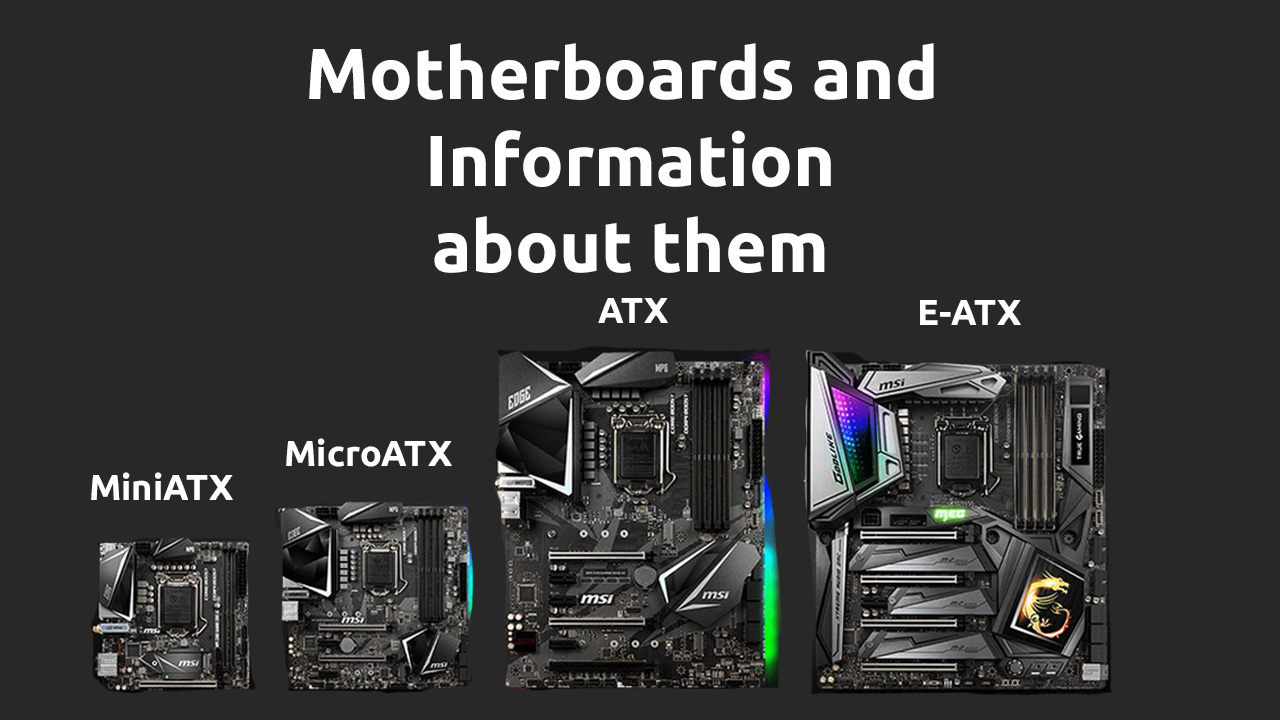 Motherboards are the basis for all computers and servers. It is in the motherboard that all the components that we talked about earlier are placed.

In today's article we will talk about the forgotten and most important (Yes, we know that all components are important, but still.) about the motherboard!

In today's article we will give answers to the following questions:

What is a motherboard?

This board is the basis for building a PC, server, etc. It is in it that all components are placed and with its help they can interact with each other.

If we are talking about a PC motherboard, then it will contain the following components:

Everything that we have listed will be connected to the motherboard itself here we have not specified Hard drives and SSDs that do not connect to it but work thanks to SATA.

What are the varieties?

There is a fairly large selection in the choice of motherboards (At the moment it includes 4 or more varieties, but let's talk about the 4 main ones) and it is about them that we will talk a little below.

It is the most common format at the moment. The size of this MP is standard – 305x244 mm. From 8 to 9 mounting holes are provided for mounting to the housing!

All power connectors on the motherboard are located on the edges of the textolite, providing convenience for connecting peripheral devices and the power supply.

The socket, RAM slots, PCI-Ex, north and south bridges are concentrated in the central part. As a rule, it includes from two to four slots for RAM. 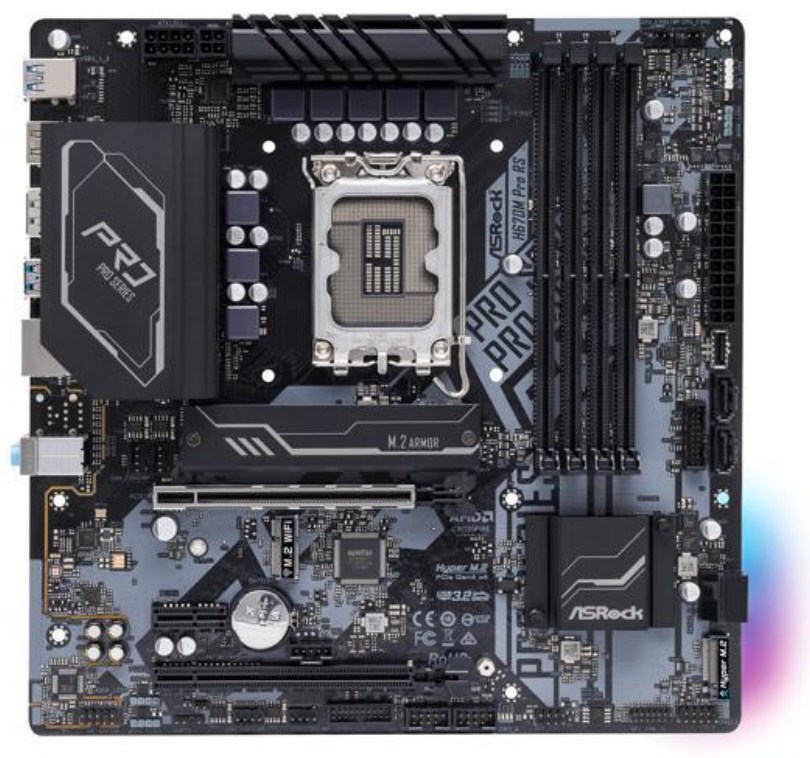 It can be called a new type that is quickly being introduced into modern computers and has some changes, for example, the board size is 305x330 mm, as well as up to 8 slots for RAM, other power circuits, improved cooling systems. In general, this is a completely different species that surpasses its ancestor.

It gathers top gaming computers and very powerful servers. Such motherboards, of course, are more expensive than others, but this is due to the possibility of their improvement and greater customization depending on your needs.

For example, E-ATX motherboards for servers have two slots for the CPU. The additional 86 mm makes it easy to place up to 16 RAM ports and expansion slots on one sheet of textolite. 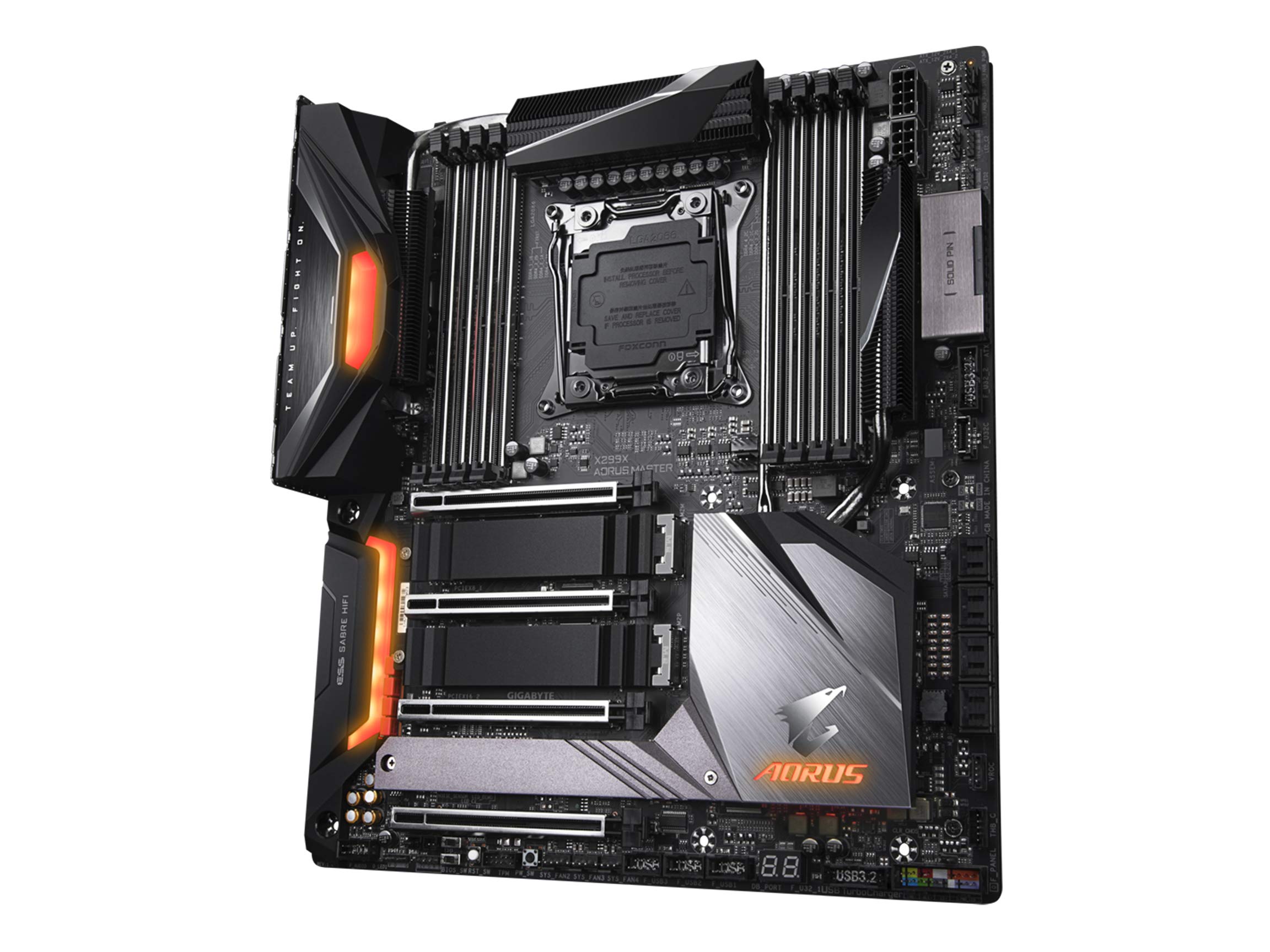 A derivative of ATX that differs slightly from standard analogues, the main difference is the dimensions of 244x244 mm, and this in turn cuts off the entire bottom panel with expansion ports and moves the SATA ports to the side panel, optimizing the available textolite space.

Since this format was originally conceived as an office one, there are fewer ports in it, but this did not allow in any case to use this format for various needs ranging from a gaming PC to a server installation.

However, if you want to create a top-end gaming computer with two video cards, then you will not succeed. There is simply no second expansion slot. 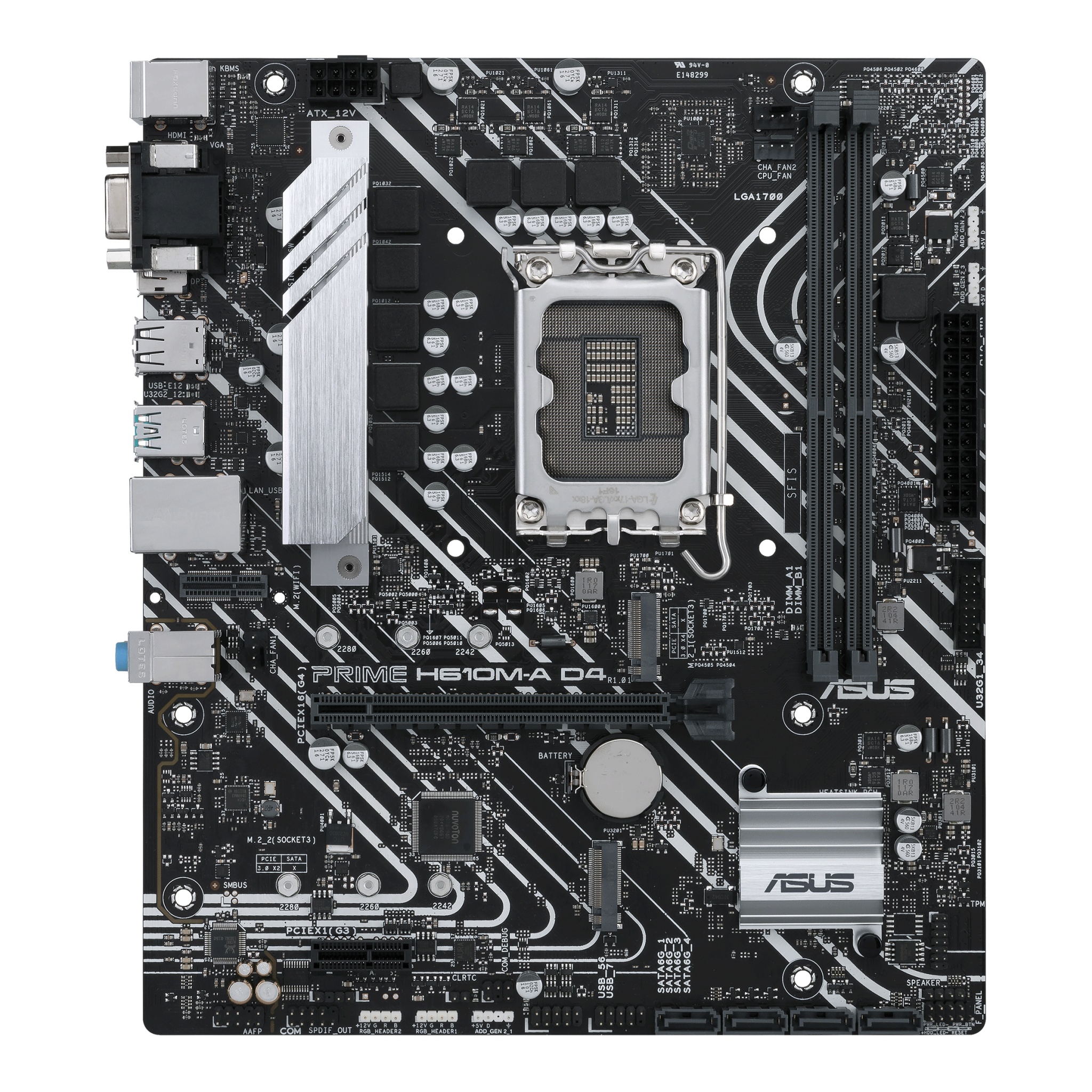 Remember microATX? So this version of MP is even smaller! Its dimensions do not exceed 170x170 mm, and compatibility with all components and support for modern chips remains.

A clear feature is the presence of an integrated processor in some boards, this can be a big problem because it is simply impossible to replace it. Although it would seem an illogical solution, it greatly reduces the cost of production, and also allows you to create the most cold, silent and fast office stations.

If something is wrong, this MP is not suitable for creating a gaming PC, but it is perfect as an office computer or a multimedia center. 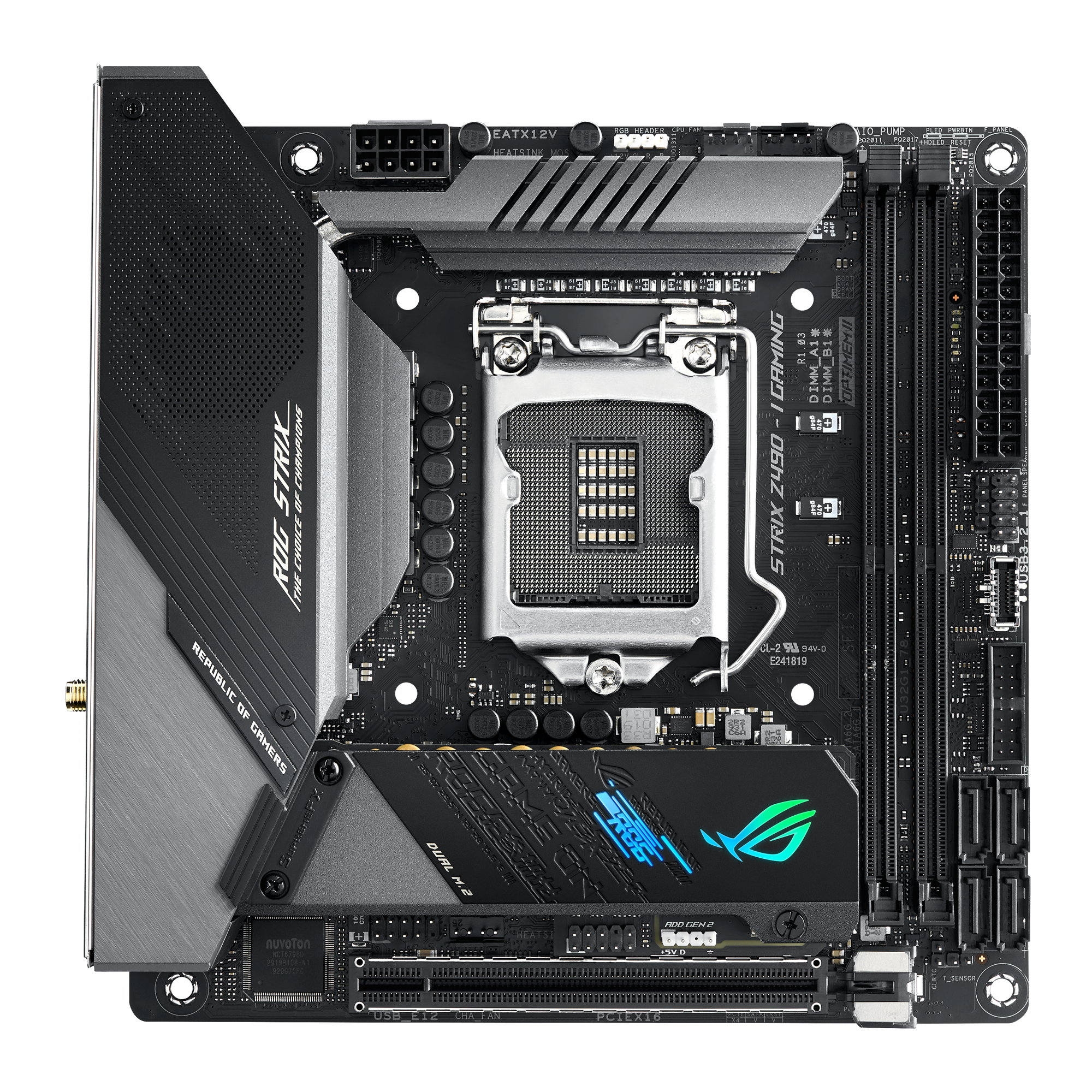 What are the differences between these varieties?

Talking about these varieties, you could already understand how they differ, but still we will point out certain differences.

One of the main differences is because it is of great importance, the size affects the number of slots or the case in which the motherboard will be placed. For example, the E-ATX will not fit into most of the cases that the ATX, microATX, etc. will fit into.

Again, their number depends on the size, for example, there are more slots in ATX than in microATX and most likely less than in E-ATX.

At the moment, new sockets are being released, for example, AM5, which simply will not be supported in MP format less than ATX, because this socket will include newer versions of PCI-E and RAM.

It should be understood that some motherboards will warm up more than others, for example, if you use a microATX format board and use too powerful a processor or a video card, then other components will also warm up due to too close location and a small case. (It makes no sense to buy a large case for a small MP)

And if you take that you will use E-ATX, then it provides passive cooling, which will protect the components from overheating.

There are other differences, but here we have indicated the most basic ones!

What should I pay attention to?

Of course, it all depends on what you are going to collect. Here are examples of which motherboard should be considered and when.

To build an office PC on which some powerful calculations or video/photo processing will not be performed, microATX is perfect for you. The small size allows you to install it even in a box and run it after connecting the components.

Everything is already more complicated here and depends on what games you are going to play. If these are games before 2013, then microATX will suit you, but if these are newer games, then your choice will vary between ATX to E-ATX. What's the difference? And the fact is that if you are going to build a top-end gaming computer, then you will need two video cards and as much RAM as possible, and this will be possible only in E-ATX.

Everything is already more complicated here. Although we did not consider in detail motherboards for these needs, but it became clear that any MP can be used here. However, if you are going to build a powerful server, then you will need two processors, and this is the ATX and E-ATX format. It is also worth noting that the E-ATX format is more adapted to this type of load and it will be easier to upgrade it.

In general, there are other reasons for the assembly, but these three can be said to be the main ones and it is worth starting from them when choosing a motherboard.

We have already considered the sockets themselves and you can get acquainted here!

And we can only say that for more powerful systems, the latest processors should be used and sockets for them will also be the last, for example, for AMD it is AM5, and for Intel a new socket will be released in 2023.

What about the Drives?

We have already sorted out which drives exist. We looked at SSD M.2 SSDs for SATA and HDD. All this can be found in our blog, and with regard to MP for these drives, the following should be taken into account - the use of SSD M.2 may limit the ability to connect SSD 2.5, that is, when connecting M.2, some SATA slots are disconnected.

Therefore, think for yourself that the speed of work is more important to you (This will provide you with M.2) or the same volume (And this will provide SSD 2.5 and HDD).

In principle, we discussed motherboards in detail, but we did not delve into the power phases, which RAM supports this or that board, where it is better not to save. But now you will have a basic understanding of what a motherboard is and you will understand which one is better to choose and when.