What control panels are there for VPS and dedicated server? 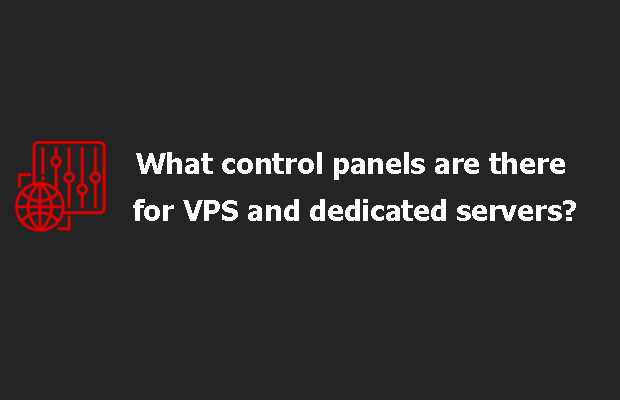 There are numerous panels that are suitable for use on VPS or dedicated servers. They can be divided into paid and free. Among both groups, there are those models that are very popular among users. All of them, in fact, solve the same problem — they help with the automation of server settings, but each of them has its own characteristics. Some are perfect for supporting from one to two sites that require flexible settings, while others help in organizing mass hosting.

It happens that providers simply give paid control panels for VPS or dedicated servers. Moreover, such providers are common, and they give the most popular panels, like DirectAdmin. Much less often, providers offer to choose the control panel themselves.

Because of this, paid control panels are much more common than free ones, which are much less used due to their uselessness. In addition, free panels are much worse than their commercial models, which makes them much worse at their duties. Of course, they can also be used, but only the most experienced users will be able to use them normally. Therefore, it is better to choose the second option between free control panels and paid ones for the average webmaster, as it is much more convenient.

First, you should deal with free models of control panels, and only then move on to paid ones.

This is one of the best free control panels. Thanks to the ability to use paid support, as well as the built-in installer, using this panel, you can open more than four hundred applications, including the CMS.

What options does this control panel provide:

This panel is designed to manage corporate hosting. It contains numerous functions that are not inferior, and in some cases even surpass their paid counterparts. In addition, almost all processes on the server will be automated.

What options does this control panel provide:

Thanks to the use of such a control panel, it will be possible to use a large set of functions that will allow you to easily monitor what is happening on the server, as well as manage all processes.

It should be noted that this panel can only be installed on an empty server.

Also, by default, the panel has a function that automatically installs popular CMS.

Judging by all these pluses, then this panel really does a good job with the tasks assigned to it. However, you will most likely have to deal with it on your own, since this panel has not received much popularity and there are very few guides on the Internet for working with it. CentOS Web Panel is used to maintain numerous sites on a server. Therefore, this panel will not work for maintaining one server.

This control panel is the lightest, both in terms of user use and weight. In addition, after installation, the user is immediately provided with detailed instructions for use.

The main disadvantage of this panel is the manual configuration of files, which is very difficult for beginners. For novice users, this can be challenging.

This control panel can be installed on any server. At the same time, it has open source code, as well as four levels of access.

Unfortunately, all these pluses are only suitable for servers that are designed to host numerous projects. This panel will be too much for one project.

Which free control panel to choose for the server?

In fact, this choice is very easy to make. If you are planning to host an individual project, then VestaCP will be enough. If you plan to organize hosting services, then in this case it is better to choose ISP Config or CentOS Web Panel. If you need a modern solution that is still in the process of updating, but provides a lot of functionality, then this is definitely Brainy. Ajenti should be chosen by those users who appreciate the ease of management and fast operation of the panel, but if you need an Apache web server, this panel will not be able to solve the tasks. Therefore, the choice must be made based on the user's requirements for the server. In addition to those considered in the review, there are other free server control panels, for example, Virtualmin, ZPanel, KeyHelp.

But still, it is most convenient to choose an already installed panel on the server, which is offered by the hosting provider. In this case, you do not need to install anything additionally, and if you need help with the work, technical support will be able to quickly make the necessary settings in the panel.

On VPS/VDS from Mivocloud, when ordering, you can select the pre-installed Vesta panel on each tariff. This panel is free and for most users its functionality is sufficient for basic tasks. If you need help with the panel or additional advice, please contact Mivocloud technical support.

Compared to free versions of control panels, free ones have much more functionality, and in general they are many times more convenient. Therefore, most of the users prefer to choose them.

If you look at the statistics, then this panel is used much more often than its competitors, especially in the Russian-speaking segment of the market. Naturally, ISPmanager gained its popularity for a reason. It has the following advantages:

Unfortunately, it will be impossible to create mass hosting using ISPmanager Lite, since it is only suitable for a server where information of a company or one owner will be placed. However, there is a more advanced version of this control panel — ISPmanager Pro. This version has much more functionality and allows you to make more flexible configuration of your server. Domestic providers are much more likely to give this version to their customers.

However, this control panel is not perfect and it also has its drawbacks. The most important one is problems with changing virtual templates after updating the panel. Because of this, there may be problems with the operation of sites hosted on servers. In addition, very often there are problems with transferring user data from other servers, as well as restoring this data from a backup. In addition, this panel is closed source. An error may also occur if you use the distribution package manager on the server.

We developed this control panel in Russia.

Among the advantages are:

This panel also has some drawbacks. The most important of them for Russian-speaking users is the absence of the Russian language. It can be installed separately from third party sites. In addition, to use DirectAdmin, the user must have extensive experience with control panels.

Developed this panel in Canada.

You have to pay twenty-nine dollars a month.

Unlike the previous control panel, cPanel is only for managing massive Internet resources. The average server simply won't have the resources to support this dashboard. So it is much more powerful than previous versions, but at the same time it cannot be used on medium hosting, only for mass hosting.

Pros of the panel:

Also, this panel has disadvantages: cPanel takes up a lot of space and at the same time consumes a large amount of hosting resources.

The panel was developed in the United States of America.

To use, you need to pay from fifteen to twenty dollars a month.

This control panel has one key feature — it is deeply integrated with Virtuozzo, which is the commercial version of OpenVZ's virtualization technology. All of these products were developed by the same company. At the same time, Plesk surpasses all analogs in the number of modules. However, most of them are simply not needed by the user. At the same time, Plesk requires a lot of resources for normal operation.

Pros of the panel:

Cons of the panel:

We developed this control panel in Russia.

You have to pay forty dollars a month.